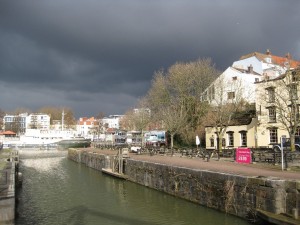 Redcliffe Parade is built on top of a red sandstone cliff. The cliffs have been quarried over the centuries to enlarge natural caves so that the whole accessible complex covers over an acre but there may be as many as 12 acres of inaccessible tunnels spread out under the houses, the hotel, and down towards the Ostrich pub.

The saying ‘Happy as a sandboy’ is said to be derived from the boys who were employed to bring refreshments to the men excavating sand from the sandstone. The refreshments came from The Ostrich pub (apparently the original ‘Spyglass’ of Treasure Island fame) and presumably, under-age drinking was not such an issue then: so you can draw your own conclusions…

At one end of the cliff there is 14th century hermit cave once occupied by John Sparke and now filled with the headstones from the Quaker burial ground which was disturbed to make way for a roundabout. The cave is surrounded by the remains of a sensory garden planted for the long vanished Bristol blind school.